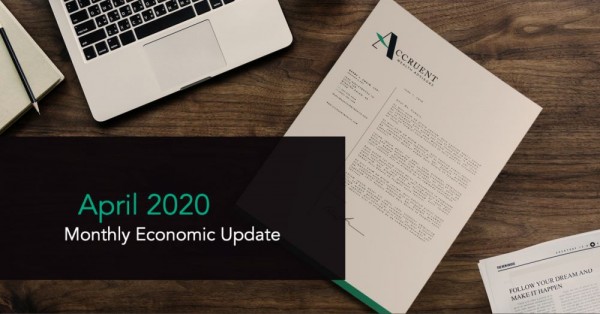 The Coronavirus Aid, Relief, and Economic Security (CARES) Act has been signed into law, bringing relief to millions of Americans, most of whom are expected to be quarantined for at least another month. The White House has asked Americans to continue “socially distancing” during the month of April. Volatility continued in International markets, even as the COVID-19 (novel coronavirus) reached the United States. The Standard and Poor’s 500 (S&P 500) Index was down 12.51% for March.1

At the end of March, the CARES Act was signed into law, releasing $2 trillion in relief to millions of Americans and U.S. businesses. This includes $1,200 checks to American taxpayers ($2,400 to married couples) and four months of additional $600 payments to those claiming unemployment.2,3

February’s unemployment rate rose a point to 5.6% (U-6 Unemployment rose to 7%), prior to the St. Louis Fed’s declaration that unemployment could jump to 32.1%, post-coronavirus. The 47 million out-of-work Americans would be the highest number seen since 1948. Michigan consumer sentiment numbers dropped to 89.1 for March, while February’s consumer spending stayed at 0.2%. February retail sales dropped to -0.5% from the previous month’s 0.6%. The ISM Purchasing Managers Index (PMI) dropped to 50.1 for February with new orders sinking to 45.9. The ISM Non-Manufacturing PMI rose to 57.3.4,5,6