In this month’s recap: stocks stay in rally mode, helped by hints that the U.S. and China may be closing in on a phase-one trade deal; hiring bounces back; key real estate indicators look stronger. 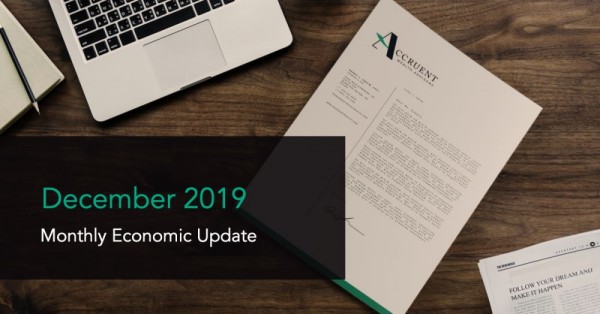 The S&P 500 rose 3.4% in November and attained a series of record closes in the process. Earnings results helped stocks, as did intermittent signals that the first stage of a U.S.-China trade agreement might be near at hand. Job creation improved, and consumer spending lived up to market expectations; consumer confidence and business activity, not so much. Housing indicators communicated good news, and the rally in stocks made the commodity sector look less attractive.

Were the U.S. and China close to signing off on the first phase of a new trade deal? According to officials from both countries, the answer was yes. When would this phase-one deal be finalized? No definite answer emerged. On November 8, President Donald Trump said that such an agreement was near, and six days later, White House economic advisor Larry Kudlow said that negotiators were “getting close” to an accord. On November 26, China’s commerce ministry announced that trade representatives had “reached a consensus” on remaining issues, and President Trump said that negotiators were in the “final throes of a very important deal.” Still, November ended without any announcement that a phase-one pact had been reached.

The Department of Labor’s latest employment report found that the economy generated 128,000 net new jobs in October. This was a surprise to the upside. Analysts surveyed by Bloomberg expected 85,000 new hires. Since more people looked for work in October than in September, the headline unemployment rate ticked up 0.1% to 3.6%. The U-6 rate, which encompasses both the unemployed and underemployed, also rose 0.1% to 7.0%.