In this month’s recap: the emerging coronavirus reins in the bulls on Wall Street, trade deals make headlines, the United Kingdom makes its Brexit, and confident U.S. households help the economy keep its pace. 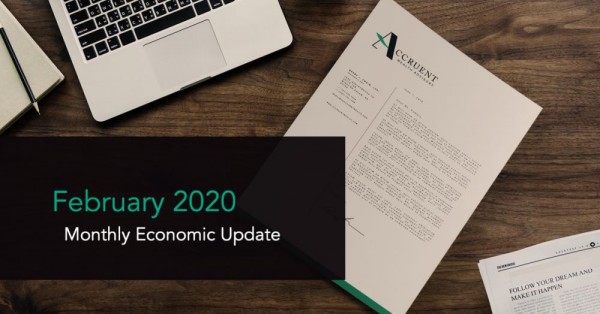 Early January gains gave way to late January losses as the coronavirus emerged as a global health concern, and correspondingly, a concern for the investment markets. The S&P 500 ended up retreating 0.16% for the month. The coronavirus outbreak was just one of the big stories in January: President Trump signed one trade deal while Congress approved another, Brexit occurred, oil prices temporarily jumped as tensions between America and Iran heightened, and stocks hit record highs again.1

On January 15, President Donald Trump and Chinese Vice-Premier Liu He signed the phase-one trade deal between the U.S. and China. The U.S. agreed to cut the existing 15% tariffs in half on certain Chinese goods, with the possibility of dismissing or reducing other import taxes on Chinese products in the coming months. China agreed to buy more U.S. crops, hard goods, and fuels, and to police counterfeiting of U.S. products and intellectual property to a greater degree. By mid-February, China is supposed to unveil an “action plan” for better intellectual property protection to U.S. trade officials.2

The Senate passed the U.S.-Mexico-Canada Agreement (USMCA), and President Trump signed it into law on January 29. Mexico has also approved the USMCA; if Canada does so, it will be finalized and take effect in 90 days. Intended as a replacement for the North American Free Trade Agreement (NAFTA), the USMCA would boost wages for auto industry workers in all three countries and make auto manufacturing more reliant on parts made in the west. The USMCA would also extend and broaden copyright terms in the digital age.3

January federal government reports showed 0.3% increases in household spending and retail sales in December. In addition to these positives, the Conference Board’s consumer confidence index increased 3.4 points to 131.6, and the University of Michigan’s consumer sentiment index ended the month at 99.8, slightly above its December final mark of 99.3. Late in January, the Bureau of Economic Analysis said the economy grew 2.1% in the final quarter of 2019, the same as it did in the third quarter.4