In this month’s recap: major stock benchmarks descend as new developments in the U.S.-China tariff dispute lead to a broad risk-off in equities; consumer confidence surges, while the housing market cools. 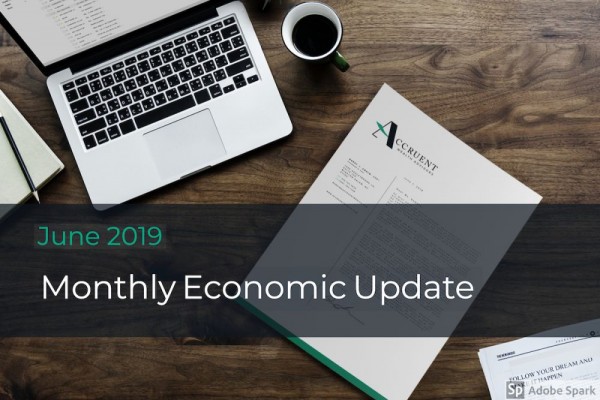 Hopes for a quick resolution to the U.S.-China trade dispute faded in May as discussions broke down and rhetoric from both sides turned tough again. The disappointment lingered on Wall Street: the month saw losses for stocks. On Main Street, consumer confidence was strong and inflation tame. Mortgage rates reached year-to-date lows, but the latest data on home sales showed weak spring buying. The price of crude oil fell significantly, and so did the yield on the 10-year Treasury.

Last month, trade was the story, and tariffs were on the minds of market participants. On May 5, President Trump announced that U.S. import taxes levied on $200 billion of Chinese products would soon rise from 10% to 25% and that virtually all other goods arriving from China would “shortly” face a 25% tariff. China retaliated, declaring that it would hike tariffs already imposed on $60 billion worth of American products, effective June 1. More tariff developments followed. On May 17, President Trump opted to delay levies planned for imported autos until later in 2019, and he removed tariffs on metals arriving from Canada and Mexico.

Late May brought more attention-getting headlines. On May 29, China’s state media suggested that its government might consider banning rare-earth mineral exports to America. (China mines or produces about 80% of the world’s rare earths.) On May 30, President Trump announced that all of Mexico’s exports to the U.S. would face 5% tariffs starting on June 10; these taxes could rise to as high as 25% by October.

Households, meanwhile, felt good about the economy and their financial prospects in May. The Conference Board’s monthly consumer confidence index rose nearly five points to 134.1; that was its best reading since November. (Confidence about the present economic situation reached its highest level since December 2000.) The University of Michigan’s consumer sentiment index jumped to a 15-year peak of 102.4 at mid-month, and it ended May at 100.0.

Consumer spending rose another 0.3% in April, by the calculation of the Department of Commerce. Overall retail sales declined 0.2% in April, but core retail sales (minus auto and gas purchases) improved 0.1%.6 Inflation advanced at a mild 2.0% in the year ending in April, according to the latest Consumer Price Index. The CPI rose 0.3% in the fourth month of the year.