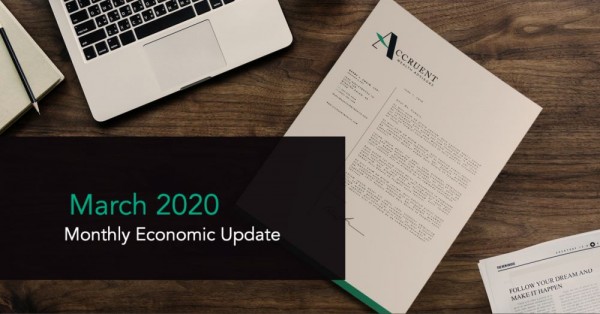 In February, anxieties about the novel coronavirus (COVID-19) rippled through stock, bond, and commodity markets. Stories about the disease dominated the news cycle and concerns that a pandemic might occur hurt equities. The S&P 500 slipped 8.41% for the month, and foreign stock markets also retreated. Oil tumbled below $50. Away from the trading floors, the latest fundamental economic indicators showed manufacturing and job creation strengthening and consumer confidence at high levels. Data on home sales were mixed; home loans grew less expensive.1

Past the coronavirus headlines, the latest round of U.S. economic indicators appeared largely encouraging.

The Department of Labor’s January jobs report topped the expectations of economists surveyed by Bloomberg: while they forecast 165,000 net new hires, the gain was actually 225,000. The labor force participation rate (the percentage of people either working or looking for work) hit 63.4%, a level unseen since 2013. The main jobless rate rose 0.1% to 3.6%, and the U-6 rate, counting the underemployed and the unemployed, rose 0.2% to 6.9%. Hourly wages were up 3.1% year-over-year.2

American manufacturing picked up its pace, according to the Institute for Supply Management (ISM). January’s ISM Factory Purchasing Managers Index, or PMI, came in at 50.9, a rise of 3.1 points, which signaled the first sector expansion in six months. ISM data also showed monthly improvements in new orders, prices for manufactured goods, and employment. The Institute’s Non-Manufacturing PMI rose half a point to 55.5 in January.2,3

Inflation also rose in January. The annualized rise in the federal government’s Consumer Price Index reached 2.5%. Yearly inflation last ran at that pace in October 2018. Core inflation (minus food and energy prices) saw a 12-month advance of 2.3%. All this said, the Federal Reserve prefers to use its core Personal Consumption Expenditures (PCE) price index to track rising consumer costs, and in January, the core PCE index was still under the Fed’s 2% yearly inflation target.4

Statistics related to consumer spending and sentiment did not hint at economic slowing. Retail sales advanced 0.3% in January; the gain was even larger (0.4%) with gasoline and other automotive purchases removed. Personal spending rose 0.2% in January, and personal incomes improved 0.6%. The University of Michigan’s monthly Consumer Sentiment Index went back above 100, finishing February at 101.0. The Conference Board’s February Consumer Confidence Index was up at 130.7.5

While delivering his semi-annual testimony on monetary policy to Congress on February 11, Federal Reserve Chairman Jerome Powell noted that central bank officials were “carefully” watching coronavirus developments and acknowledged that the global economic effects of the virus could “very likely” impact America. On February 28, Powell stated that central bank policymakers would not be hesitant to “use our tools and act as appropriate to support the economy.”6,7