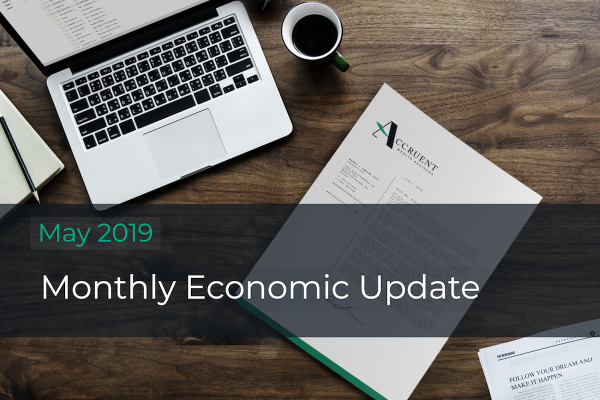 Wall Street shifted its focus from trade to earnings in April. On that front, the news was good: through April 26, first-quarter results for S&P 500 firms had beaten expectations by 5.3%, a bit better than the historical average of 4.8%. A strong first-quarter gross domestic product reading and solid consumer spending and hiring numbers did much to quell worries about the economy slowing. Existing home sales retreated again; mortgage rates went north again. Oil prices rose. Bullish sentiment was palpable.1

Statistically speaking, economists and investors found much to like while looking at the latest round of fundamental indicators.

The first quarter had been a good one: the federal government’s initial estimate of economic growth in that period was 3.2%, far above the 2.2% of Q4 and the 2.3% consensus forecast of analysts surveyed by MarketWatch. In March alone, consumer spending increased 0.9%, and retail sales improved 1.6%.2,3

Unemployment remained at 3.8% in March (and the U-6 jobless rate, which factors in the underemployed, was 7.3% for another month). Nonfarm payrolls grew by a net 196,000 jobs in the third month of the year, which was a nice rebound from the anemic 33,000 gain for February.3

The Institute for Supply Management’s twin purchasing manager indexes, monthly gauges of U.S. service sector and manufacturing sector activity, were well above 50. (When these indices fall below 50, the sectors are judged to be contracting rather than growing.) ISM’s service sector PMI was 56.1 in March; its factory sector PMI, at 55.3.3

The most-watched U.S. consumer confidence index, maintained by the Conference Board, rose 5.0 points in April to a notably high mark of 129.2. The University of Michigan’s monthly index measuring household sentiment also rose, gaining 0.3 points to reach 97.2 for April.2

Yearly inflation picked up from 1.5% to 1.9% in March, but this mostly reflected a jump in gasoline and electricity costs as well as rents. This left annualized inflation near the Federal Reserve’s target rate of 2.0%.3,4

On April 10, the European Union extended the deadline for the Brexit to October 31, temporarily assuaging fears that the United Kingdom would leave the E.U. without any divorce deal. In announcing this agreement, European Council President Donald Tusk warned U.K. leaders, “Please do not waste this time.” The extension has actually been called a “flextension,” as the U.K. is free to leave the E.U. at any time before Halloween if its Parliament can finally agree to pass a withdrawal deal.5

As April ended, a U.S. delegation landed in Beijing to further trade talks with China, intent to make “substantial” progress toward a truce in the tariff dispute between the two countries. While Secretary of the Treasury Steven Mnuchin told Bloomberg on April 30 that an agreement on trade enforcement methods was “close to done,” there was still much headway to be made on other issues. China’s official manufacturing purchasing managers index was close to the contraction line of 50 in April, coming in at 50.1. Elsewhere in the region, Taiwan’s economy expanded 1.7% in Q1, but officials in Hong Kong announced its economy was slowing; factory output in Japan and South Korea also fell during the year ending in March.6