In this Q3 recap: the U.S. and China intensify their trade dispute, but agree to negotiate again, the Federal Reserve cuts short-term interest rates once more, and stocks ride through some volatility to end the summer higher. 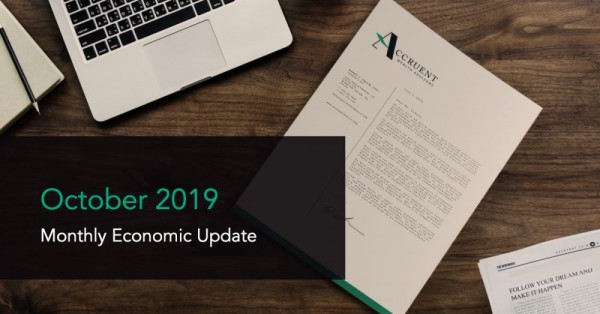 THE QUARTER IN BRIEF

Summer doldrums? Not exactly. The third quarter brought a number of attention-getting events, and while investors took some cues from them in the short term, Wall Street’s confidence remained – the S&P 500 rose 1.19% in Q3. The abrupt devaluation of the Chinese yuan shocked traders, and shifting Treasury yields also made headlines. Trade negotiations between the U.S. and China broke down, but as the quarter ended, it looked like they would resume in the fall. Manufacturing was giving mixed signals, both here and abroad, breeding concerns about the health of the global economy. Both the Federal Reserve and the European Central Bank took steps to ease monetary policy.

Wall Street and Main Street had plenty to think about in the quarter. Trade remained the big issue, with China and the U.S. amplifying their ongoing dispute. On August 1, the U.S. announced tariffs on an additional $300 billion of Chinese products – some would be effective September 1; others, effective by December 15. Four days later, China devalued its main currency, the yuan, to a level unseen in 11 years – a move that immediately sent U.S. stocks 3% lower. (Devaluing the yuan made Chinese goods cheaper for buyers paying for them in dollars, effectively offsetting the impact of U.S. tariffs.)2,3