In this month’s recap: stocks descend as traders respond to the devaluation of the Chinese yuan as well as new developments in the ongoing U.S.-China trade talks; the price of gold rises, and bond yields fall. 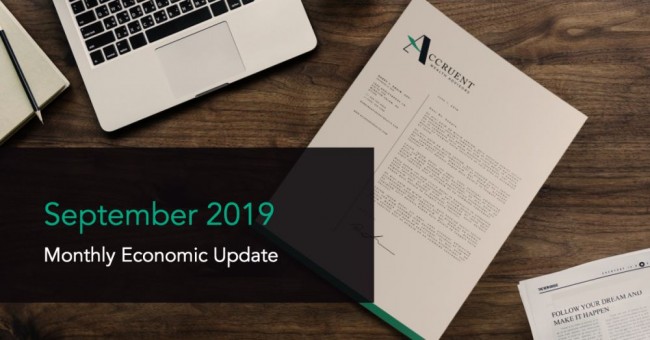 The stock market had a tumultuous August, reacting to the sudden devaluation of the Chinese yuan and the escalation of the trade dispute between the U.S. and China. Ultimately, investors seemed more interested in risk aversion: the S&P 500 lost 1.81% for the month. Demand for bonds helped to send Treasury yields lower; prices of precious metals climbed. Away from the markets, monthly personal spending and retail sales gains were strong.

Tariffs and trade issues remained front and center in the Wall Street conversation. On August 1, the White House announced a 10% import tax on an additional $300 billion of Chinese goods coming to U.S. shores. (Most of these products are so-called “final” consumer goods, like clothing and shoes.) In a nod to importers and retailers, the White House stated on August 13 that this 10% tariff would be delayed until December 15 for certain products: toys, consumer electronics, and other items that are big sellers during the holiday shopping season. Effective December 15, tariffs will impact nearly all Chinese imports to the U.S.2

China soon retaliated, and the U.S. quickly responded. On August 25, China unveiled a plan to place tariffs on an additional $75 billion of U.S. goods. As part of the plan, import taxes on American-made cars and trucks would jump by 30%. Just hours later, the White House announced that the tariffs planned for September 1 and December 15 would rise by 5% to 15%, respectively, and that the 25% tariff currently in place on $250 billion of Chinese imports would rise to 30% on October 1.